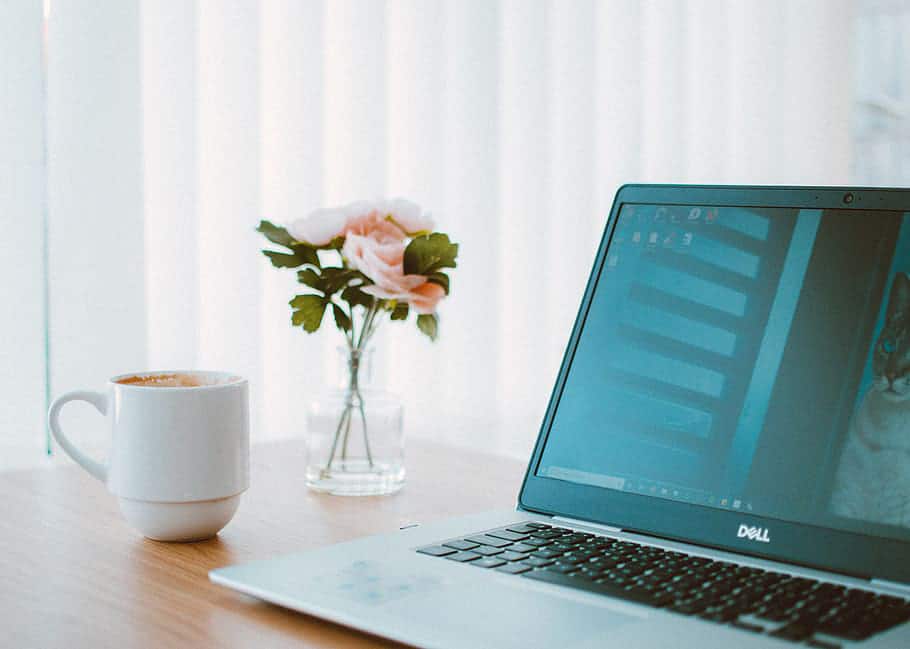 Lyricists are wordsmiths, puzzle-solvers, and experts in meter and rhyme. Writing good lyrics takes an awareness of character, a strong sense of timing, an understanding of arc, and a broad vocabulary.

It doesn’t take a lot of fancy tech to write effective lyrics. However, there are a few resources and routines lyricists can use to help them be more efficient and effective.

I asked a few of my lyricist friends about their process and practice when it comes to writing lyrics.

Thanks so much to lyricists Chad Beguelin, Amanda Green, Marcy Heisler, Kait Kerrigan, Irene Sankoff, and Amanda Yesnowitz for sharing their thoughts!

1. What Software or Tech Do You Use for Writing Lyrics? 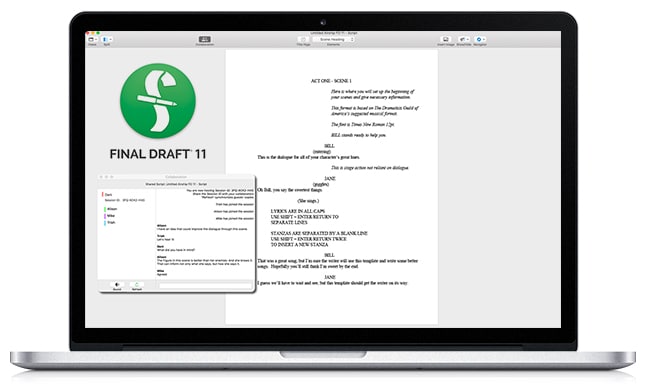 The industry-standard among musical theatre, film, and television writers, Final Draft came up as a common resource from our panel of lyricists as well.

I use FINAL DRAFT, and I usually make sure assistants and production staff have it before we all jump in.  It’s really important everyone on a production have synchronization so I try to square that away right off the bat. MS Word is possible, and no one has a great program for multiple lyric columns, but Final Draft is my go-to.
~Marcy Heisler

Note: I’ve spoken with Final Draft and they’re working on the multiple lyric columns issue. Currently you can use the Dual Dialogue tool to accomplish 2 lyric columns.

While Final Draft is useful, it’s not absolutely necessary for lyric writing. Any software used for creating written documents is perfectly fine, such as Word or Google Docs. Lyricist Amanda Green (Bring It On – The Musical, Hands on a Hardbody) especially enjoys the collaborative benefit of being able to share a Google doc with her writing partners. 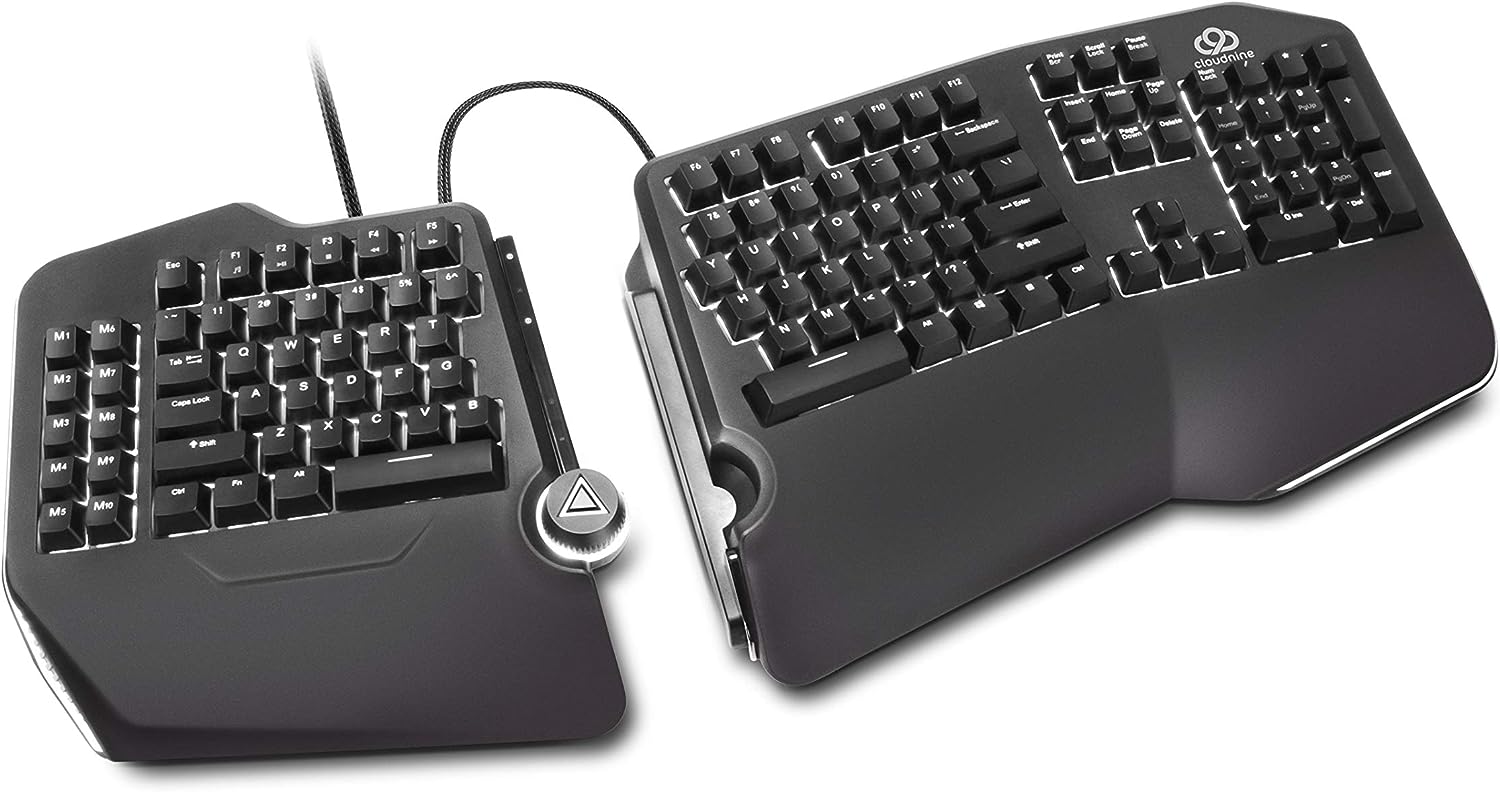 Irene Sankoff (Come From Away) has been trying out a new split keyboard that is supposed to be more ergonomic and comfortable if you’re writing a lot. Here are a few to check out if you get wrist or shoulder pain from typing:

Our panel were also keen to have a variety of non-tech items at hand at all times, such as “stickies, napkins, folded pieces of blank paper,” (as per Kleban Award-winning lyricist Amanda Yesnowitz) and “a crayon or marker and whatever I can write on from the bottom of my purse!” (Irene Sankoff)

Chad Beguelin (The Prom, Aladdin) also recommends keeping a pen and pad beside your bed, just in case the perfect rhyme comes to you in the middle of the night. 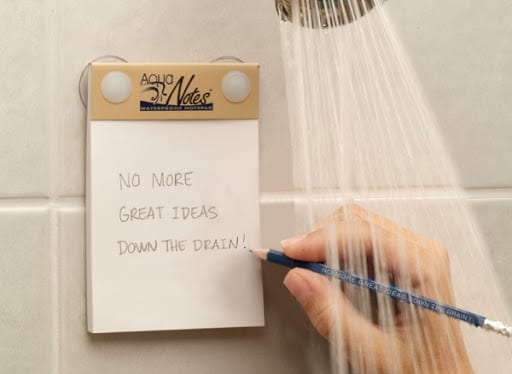 I haven’t used these, but I’m intrigued by the idea of Aquanotes which is a waterproof pad for when inspiration strikes in the shower. Anyone out there use those? I’d love to hear your thoughts in the comments section below!

2. What is your go-to research method or resource?

While every project is different, most agree that it’s best to get up close and personal with primary sources if available. When researching for Come From Away, Irene Sankoff enjoyed direct interviewing the people they were writing to represent.

Nothing beats hearing something straight from the source in the musical cadence, phrasing and accent of the person whose story you’re telling. And sometimes your interviewees invite you for dinner.
~Irene Sankoff

To ensure he was creating the right voice and language for his characters, Chad Beguelin followed a similar process while working on The Prom.

I would constantly bounce lyrics for the younger characters off of my nieces and nephews. Every once in a while they would say, “Oh, God, Uncle Chad, nobody says that anymore.”
~Chad Beguelin

Stephen Schwartz equally sought insight from his daughter when developing Wicked’s “For Good.”

“I had a long conversation with my daughter, in which I asked her what she would say to her best friend (someone she has known pretty much all her life), if she knew she was never going to see her again. A lot of what Jessie said got transformed into the first verse of the song. Other than that, it was simply trying to put myself into the hearts and minds of the characters and see what they said.”
~Stephen Schwartz in Carol de Giere’s Defying Gravity

3. Where do you seek feedback?

While receiving feedback isn’t always easy, it’s a requirement to make the work and the writer better. Feedback also grows your tenacity muscles. Chad Beguelin remembers feeling insecure early on when first presenting his work. “I used to feel a sense of panic when they didn’t love a lyric, but then I realized that they actually were simply saying that they believed I could do better. So I try to take that attitude as much as I can.”

All of those interviewed claimed their collaborators and director were the primary sources for feedback and development. Friends and family were a close second. Marcy Heisler runs everything by her mother whom she’s lovingly named her “mamaturg.”

Kait Kerrigan shared that she regrets not being able to work with dramaturgs more in her projects. She explains, “I haven’t had the luxury of dramaturgs. I’ve asked for them on musical projects – especially historical ones – and it’s never happened for me. I’m working on a play right now with the New Jersey Play Lab and having the dramaturgical support of Cheryl Katz and her team has been wonderful.” 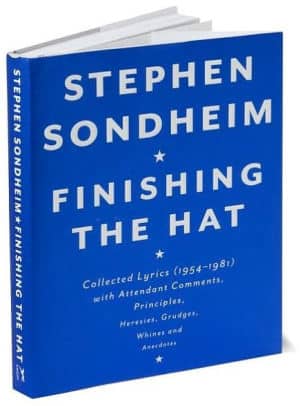 These are favorites in our lyricist panel’s libraries:

5. What’s your process like? Anything you prefer to have readily available while you write?

It has been said that writers fall into one of two categories: “Plotters” or “Pantsers.” Plotters being those who plan, outline, and have an organized process when writing. Pantsers aptly “fly by the seat of their pants” and are happy “go with the flow.” It takes all kinds, and everyone’s creative process is unique.

However, there might be a few practices from our pros that you’d like to adopt into your routine.

First of all, don’t be hungry. “I make sure I’ve eaten more than I think I need right before so I have no excuses” says Amanda Yesnowitz.

Also, give yourself breaks and space to move around when needed. Chad Beguelin likes to have “lots of room to pace. I have to walk when I think for some reason.”

Before you settle in, create an environment that you’ll enjoy spending time in. Marcy Heisler likes fresh flowers on the table, while Amanda Green wants her coffee, seltzer, and mint gum at the ready. Irene Sankoff prefers black tea and a thick pen to prevent hand pain (she has one with a Minnie Mouse head that writes in every color).

Chad Beguelin likes to have a rhyming dictionary handy when writing lyrics. His favorite is The New Comprehensive American Rhyming Dictionary by Sue Young, and I use (a very tattered copy of) the Songwriters’ Rhyming Dictionary by Jane Whitfield. Amanda Yesnowitz warns, however, to not become overly dependent on outside rhyming sources and stifle your own creativity. “I’m always trying to innovate with creative enjambments and trick rhymes which won’t be listed there.”

I (Holly) like to keep a divided notebook or legal pad with me when I’m out and away from my desk or writing spot. I feel much more creativity and depth when hand-writing my ideas instead of typing them into my phone. I’ll do that in a pinch, say when I’m running and an idea hits me (which happens often), but the natural flow of handwriting seems to often prompt more ideas and exploration.

5. Any final tips or resources for lyricists?

Some essential, some tongue-in-cheek (these are lyricists, remember?)….

Irene Sankoff: “Day jobs are amazing resources not only for money and benefits, but also for perspective and community and interesting stories which can be turned into scripts. I also recommend rescue cats. And Universal Healthcare Canadian Style sling with quality subsidized childcare Canadian Style.”

Chad Beguelin: “The most important resource is a group of friends and collaborators who believe in you and your work.”

Kait Kerrigan: “I travel pretty light. I like that you can write anywhere. I write lyrics on my phone all the time on the subway. If you’re out in the world, it’s really helpful to have a good pair of headphones with you. Sometimes you need to block out music in a cafe or hotel lobby. Other times, you need to listen to a melody on repeat so you can write to it.”

Marcy Heisler: “Having a community of fellow writers to consult or bounce things off of is a precious thing. I am so grateful for my generous group of colleagues.  We are indeed a family.”

Are you a lyricist looking for your own community of fellow writers? Check out our MusicalWriters Academy membership for a supportive and inspiring group of colleagues to encourage you in your musical writing journey.

New to writing lyrics? I highly recommend the “Songwriting: Writing the Lyrics” online class taught by Berklee School of Music professor Pat Pattison through Coursera. I continue to use the concepts I learned in this class and pass them on to students I coach in songwriting.

Are you a lyricist? What are YOUR favorite resources and routines for writing? Share in the comments below! 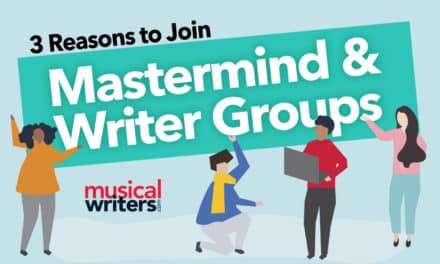 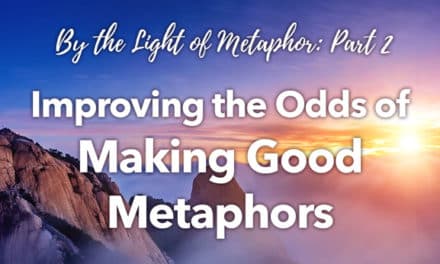 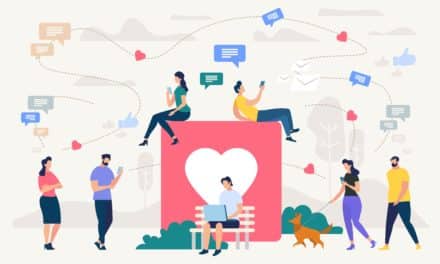 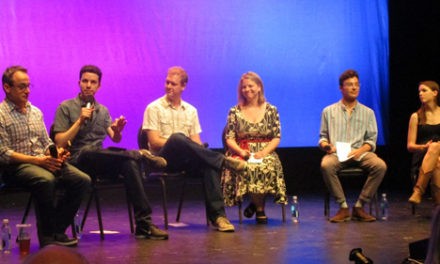