Rodgers and Hammerstein’s first effort turned out to be the most revolutionary piece of American theatre, instantly and irrevocably changing a genre into something different, something better. Before, there was an arbitrariness to musical plots, and a song might as well have come from a different character than the one it comes from. The words and music to Oklahoma! are so specific, each could only come from this person, at this time, in this place.

I like to picture the audience that greeted its opening in March of 1943. All the musicals they’d seen began with splashy choruses, a lot of color and light, and, most importantly, dancing girls. Instead, Oklahoma‘s curtain comes up on an old woman churning butter. The orchestra stops, and we hear the voice of the hero, completely offstage. This must have seemed more natural and real than anything audiences were used to. The lyrics paint a picture for us: They’re not flowery or too poetic, but are full of fresh images that surprise and delight us – the weeping willow that’s laughing, the little brown maverick that’s winking. The music repeats the first line of the verse just as folk songs do, so we give in more willingly to suspending our disbelief: a man is singing, sure, but this seems like just what such a man would sing. The end of the verse has a harmonic build-up and crescendo that tells us something wonderful is coming. And it is. The chorus sweeps down and up and then there’s that first syllable of “morning” that surprises us. It’s a half-tone lower than we might expect it to be; in effect, kind of a blue note. The tune sweeps back down in the same direction like a swing and now it comes up a little higher, on the first syllable of “feeling” – relieving the tension that was created before. This tune is so good it can stand to be heard three times in quick succession, which it is.

The old woman churning butter humorously flirts with Curly. He responds that he’d never marry her or any of her kinfolk, which clues us in to the subtext behind the joke: He IS interested in marrying her kinfolk, her headstrong niece, Laurey. She enters singing the same song, and immediately feigns indifference. What’s so entertaining about this scene is that the characters are so real, wooing each other by insulting each other. It’s humorous, and it’s very much like relationships we in the audiences are likely to have had. 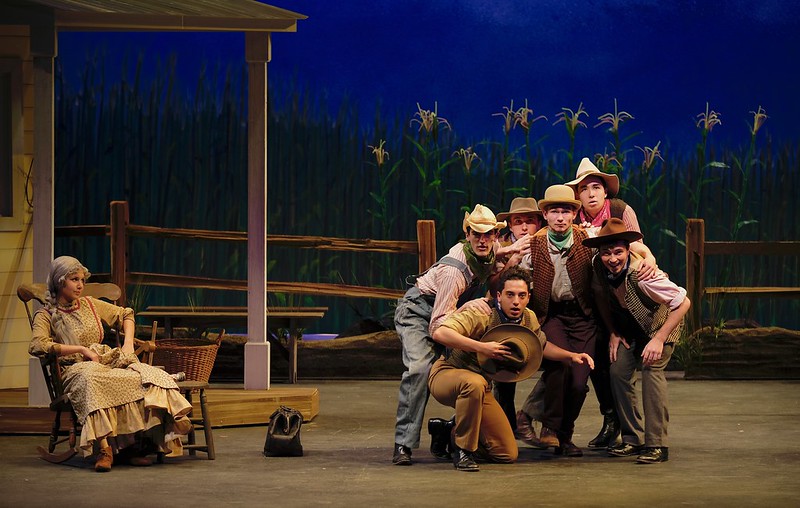 When Curly is goaded into describing a perfect date, he launches into a captivating song about the ideal form of transportation. His description is so specific, so complete, that we get lost in the romance of it all, and can picture exactly what he’s talking about. We’re enchanted by his description and so, obviously, are Laurey and her aunt. Rodgers’ melody is clearly inspired by the clip-clopping of the horse’s hooves. It’s hypnotic, but before this can ever get too dull or lulling he takes us to interesting new harmonic places. But none of these is out of time or place with the turn-of-the-century Oklahoma setting.

The next page of the show introduces that all-important element, sex. A fellow has come back from the big city with kind of a kaleidoscope that shows dirty pictures. Later, the villain shows the hero the same kaleidoscope, and its evil trick: when you press a button on its end, a knife juts out and stabs the viewer in the eye. And some people complain that Oklahoma! is too sweet! It’s got sex and violence throughout.

Ado Annie’s got a delightfully comic problem: She loves kissing and hugging so much, she’s unable to be faithful. I’d estimate that her “I Cain’t Say No” is the most-performed comedy song of all time. Rodgers again came up with music that’s exciting, and oh-so-right for the time and place. The main tempo is as spirited as the character, the chord progression exciting. The end of the tune takes us to higher and higher notes in interesting harmonic ways. It’s almost too good to be mere (ha!) humorous material. 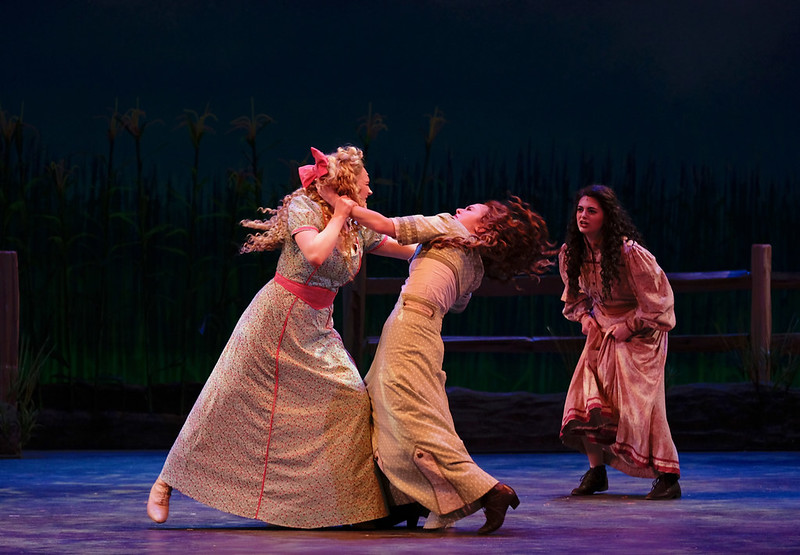 Laurey and Annie each have two men interested in them: one is a solid cowboy type who will eventually propose marriage. The other is a shifty fellow, more interested only in sex. If that seems pretty strong for a musical written so long ago, consider that Oklahoma! is also about class conflict. One song tells us, “The Farmer and the Cowman Should Be Friends,” but they’re not, of course, because each vies to use the land in different ways. Jud Fry, the malevolent villain of the piece, dreams he is “better than that smart-aleck cowhand who thinks he is better than me,” but we know he isn’t. He’s of a lower class, lives underneath the ground (!) and doesn’t seem to wash. Ado Annie’s triangle contrasts a sincere fellow with a peddler who tries to pass his goods (and himself) off as Arabian. The traveler vs. the homesteader; the seeker of guilt-free sex vs. the marrying kind: it’s all class conflict.

In another political sense, Oklahoma! is about a community’s maturity leading them to the right to self-rule. Much time is spent on the legalities of trying a man for murder, formally declaring it an act of self-defense. The citizens are no longer vengeful posses; they’re ready for statehood. 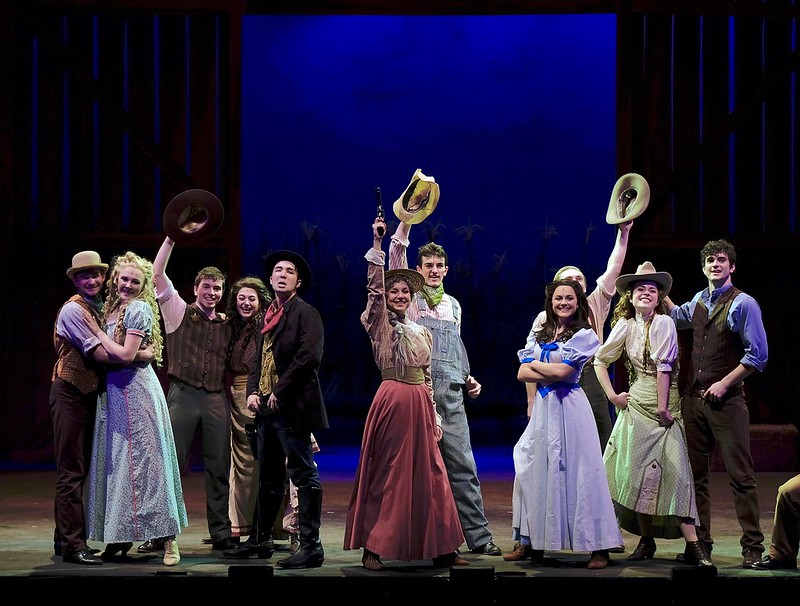 A good dose of Southern resolve

One of the things that bothers me most about the musicals of the past couple of decades is their presentation of self-pity. People brood about dead wives, dead fathers, face-disfigurement, and every time they do I think of “Many a New Day”: “Why should a woman who is healthy and strong blubber like a baby if her man goes away, a-weeping and a-wailing how he’s done her wrong?” If you live your life with this attitude (as Laurey does), you’ve given me a reason to like you. We all have romances go awry, and people who keep beating their breasts on and on soon become insufferable. In contrast, the ability to summon up a positive outlook in the face of life’s downturns is admirable, and, in Oklahoma!, we love the heroine for it.